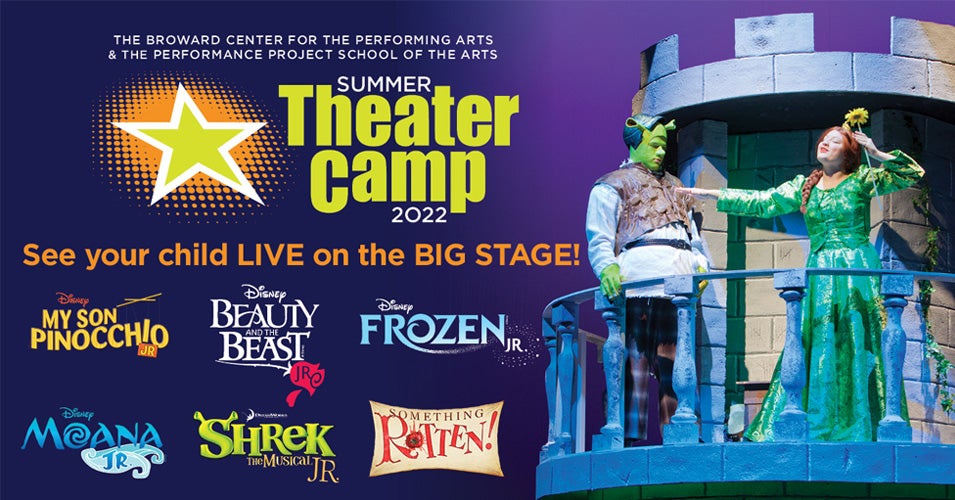 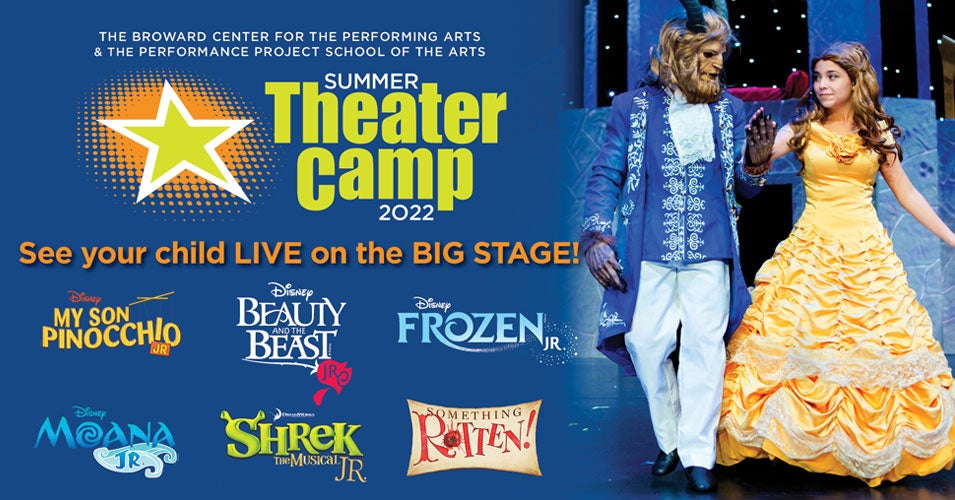 The Broward Center for the Performing Arts and The Performance Project School of the Arts, welcome you to Summer Theater Camp 2022! Take part in two sessions June 13th – August 19th. Camps are available at Broward Center in Fort Lauderdale, Aventura Arts & Cultural Center in Aventura and the Rose & Alfred Miniaci Performing Arts Center at Nova Southeastern University in Davie.

See old friends and make news ones, be taught by professional performing arts teachers, and have fun putting on an amazing show on the Amaturo stage. The camp offers students the chance to study singing, dancing and acting while rehearsing for a theatrical production culminating in a final performance on stage at the Broward Center. As part of enrollment, each camper will receive a Summer Theatre Camp 2022 t-Shirt and cast photo.

All shows and dates are subject to change. Discounts may not be combined. All sales final.

*Auditions for Young Professionals are required prior to enrollment.

Disney’s Beauty and the Beast Jr.

Based on the original Broadway production that ran for over 13 years and was nominated for nine Tony Awards, and the Academy Award-winning motion picture, Disney’s Beauty and the Beast Jr. is a fantastic adaptation of the story of transformation and tolerance. Featuring some of the most popular songs ever written by Alan Menken and the late Howard Ashman, along with new songs by Mr. Menken and Tim Rice, the classic story tells of Belle, a young woman in a provincial town, and the Beast, who is really a young prince trapped under the spell of an enchantress. If the Beast can learn to love and be loved, the curse will end and he will be transformed to his former self. But time is running out. If the Beast does not learn his lesson soon, he and his household will be doomed for all eternity.

The enchanting modern classic from Disney is ready for your Broadway Junior stars! Frozen Jr. is based on the 2018 Broadway musical, and brings Elsa, Anna, and the magical land of Arendelle to life, onstage. The show features all of the memorable songs from the animated film, with music and lyrics by Kristen Anderson-Lopez and Robert Lopez, plus five new songs written for the Broadway production. With a cast of beloved characters and loaded with magic, adventure, and plenty of humor, Frozen Jr. is sure to thaw even the coldest heart!

Disney’s Moana Jr. brings the adventures of Moana and her village of Motunui to life onstage feaurting all the beloved songs from the film, written by Tony®, GRAMMY, Emmy, and Pulitzer Prize-winning composer Lin-Manuel Miranda, Opetaia Foa’i, and Mark Mancina, including “How Far I’ll Go,” “Shiny,” and “You’re Welcome.” This thrilling and heartwarming coming-of-age story follows the strong-willed Moana as she sets sail across the Pacific to save her village and discover the truth about her heritage. Moana and the legendary demigod Maui embark on an epic journey of self-discovery and camaraderie as both learn to harness the power that lies within. With empowering messages of bravery and selflessness, Moana JR. is sure to bring out the hero within each of us.

In Disney’s My Son Pinocchio Jr., toymaker Geppetto’s little wooden puppet is given new life. This new musical, which retells the classic Disney story from Geppetto’s perspective, features the beloved classic songs, “When You Wish upon a Star” and “I’ve Got No Strings,” alongside a host of new songs by Oscar winner and Grammy Award winner, Stephen Schwartz. Join the Blue Fairy, Stromboli and a lively cast of characters as Geppetto journeys beyond the toyshop to discover the meaning of family. When the Blue Fairy grants Geppetto's wish to bring his beloved puppet to life, the new father quickly learns the challenges of being a parent and the meaning of unconditional love.

Once upon a time, in a far away swamp, there lived an ogre named Shrek. Based on the Oscar-winning DreamWorks Animation film and fantastic Broadway musical, It's a "big bright beautiful world" as everyone's favorite ogre, and his new pal Donkey lead a cast of fairytale misfits on an adventure to rescue a Princess Fiona from the evil Lord Farquaad. Part romance and part twisted fairy tale, Shrek Jr. is an irreverently fun show with a powerful message for the whole family.

Two brothers set out to write the world’s first musical in this hilarious mash-up of sixteenth-century Shakespeare and twenty-first-century Broadway. Welcome to the Renaissance and the outrageous, crowd-pleasing musical farce, Something Rotten. Created by Grammy Award-winning songwriter Wayne Kirkpatrick, and successful screenwriters Karey Kirkpatrick and John O’Farrell, Something Rotten was lauded by audience members and critics alike, receiving several Best Musical nominations and hailed by Time Out New York as "the funniest musical comedy in at least 400 years".

Following a career as a professional actress, Nina Felice founded The Performance Project School of the Arts to nurture young talent and encourage the pursuit of their creative dreams. With a bachelor’s degree in Fine Arts and a master’s degree in Child/Family Psychology, Nina incorporates the two disciplines into her teaching techniques to guide and motivate young performers.

What are the current health and safety guidelines for the Broward Center for the Performing Arts?

Click here to review our current Health & Safety Guidelines before coming to the Broward Center.

What are the office hours?

What happens if camp is sold out and I am on the waitlist?

If a space becomes available, you will be contacted by a Broward Center education staff member to register within 48 hours of notice. If we do not hear back from you within this time period, we will move on to the next person on the waitlist.