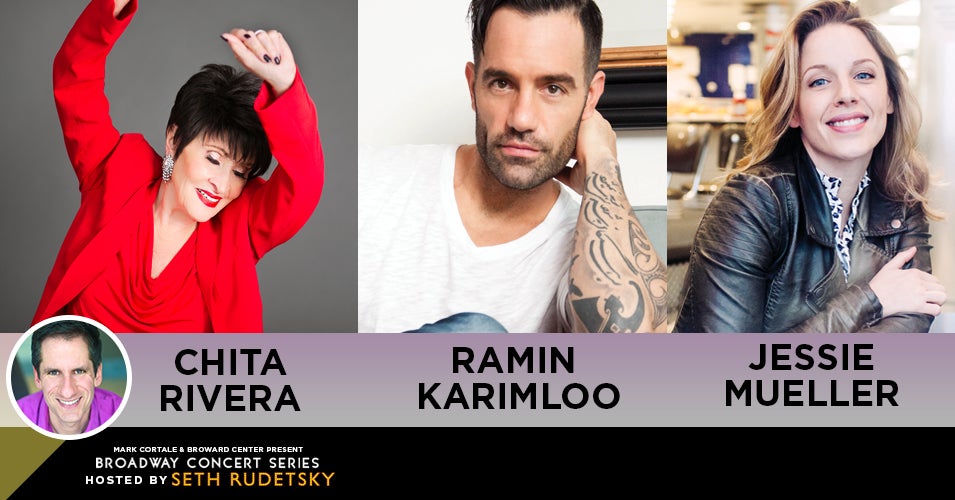 The unique format of the series that differentiates it from any other is a seamless mix of intimate behind-the-scenes stories prompted by Rudetsky’s insightful, funny and revealing questions and the music from the artists’ stellar careers.

Rudetsky is the afternoon host on Sirius/XM Satellite Radio’s On Broadway as well as the host of Seth Speaks on Sirius/XM Stars. As a pianist, he has played for more than a dozen Broadway shows including Ragtime, Phantom of the Opera and Les Misérables. He was the artistic producer/music director for the first five annual Actors Fund Fall Concerts including Dreamgirls with Audra MacDonald (recorded on Nonesuch Records) and Hair with Jennifer Hudson (recorded on Ghostlight Records, Grammy® Nomination). In 2007, he made his Broadway acting debut playing Sheldon (singing “Magic to Do” in a devastating unitard) in The Ritz directed by Joe Mantello for The Roundabout Theater. Off-Broadway, he wrote and starred in the critically acclaimed Rhapsody In Seth (directed by Peter Flynn) at the Actors Playhouse and has also appeared on TV on Law And Order C.I. and had a recurring role on All My Children. As an author, he penned the non-fiction Q Guide To Broadway, the novel Broadway Nights and the recently published My Awesome/Awful Popularity Plan (Random House). Rudetsky played himself on Kathy Griffin: My Life on the D-List, was the vocal coach on MTV’s Legally Blonde reality show and starred opposite Sutton Foster in They’re Playing Our Song for the Actors Fund. Recently, he co-wrote and starred in Disaster! (which the New York Times called a “triumph”), and he currently writes a weekly column on Playbill.com and tours the country doing master classes and performing his one-man show Deconstructing Broadway.

Rudetsky kicks off the Series with Chita Rivera on Sunday, January 29 at 7 p.m. Rivera received a Tony Award for Lifetime Achievement in addition to her two wins for performances in The Rink and Kiss of the Spider Woman as well as eight other nominations. In 2015, she starred in The Visit, the final John Kander/Fred Ebb/Terrence McNally musical directed by John Doyle and choreographed by Graciela Daniele. Her electrifying performance as Anita in the original West Side Story launched a career highlighted by iconic roles in Bye Bye Birdie and Chicago as well as recent Broadway peformances in The Mystery of Edwin Drood, the revival of Nine with Antonio Banderas and The Dancer's Life, celebrating her spectacular career.

Olivier and Tony Award nominee Ramin Karimloo joins on Sunday, February 26 at 7 p.m. After making his name in some of the West End's most enduring productions, most notably Phantom of the Opera and Les Misérables, he returned to the role of the Phantom in the original production of Love Never Dies, the Phantom of the Opera sequel. On Broadway, he originated the role of Gleb Vaganov in Anastasia and starred in the revival of Funny Girl.

The Series culminates when Jessie Mueller joins Rudetsky on Saturday, March 18 at 8 p.m. Winner of the Tony Award for Best Actress in a Musical for Beautiful: The Carole King Musical, Mueller also received Tony nominations for her performances in Carousel, Waitress and On A Clear Day You Can See Forever.  She most recently starred on Broadway in the revival of The Music Man opposite Hugh Jackman. Other major Broadway credits include her performances in Nice Work if You Can Get It  and The Mystery Of Edwin Drood (Drama Desk nomination).

Tickets to each event are $39-$69 with $125 VIP tickets that offer a meet and greet with the artists. Ticketmaster is the only official ticketing service of The Parker. Buy tickets online at ParkerPlayhouse.com and Ticketmaster.com; by phone at 954.462.0222; in person at The Parker box office and the Broward Center’s AutoNation Box Office. Patrons save 20% when buying the 3-show concert series package. To subscribe to all 3 shows, contact 954.468.3280 or email subscriptions@browardcenter.org.