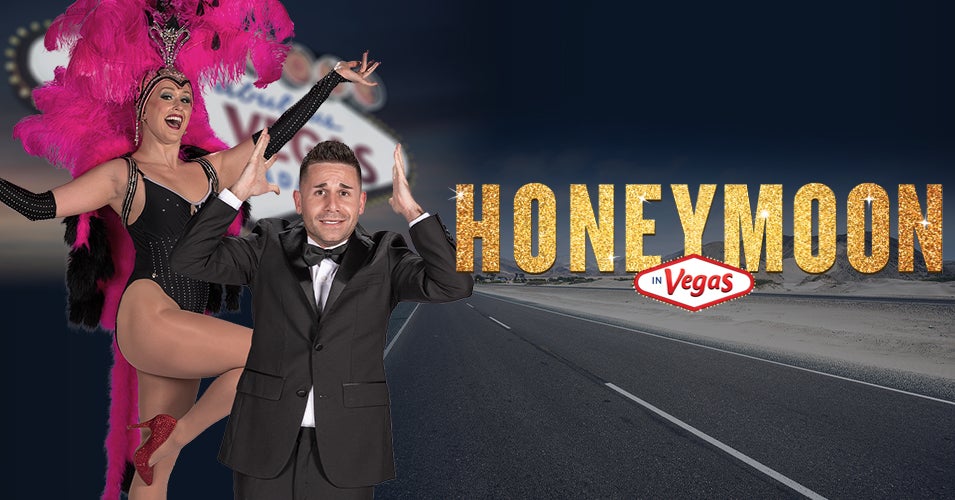 Fall in love and get in the spirit of Valentine’s Day with Honeymoon in Vegas - The Musical as Slow Burn Theatre Company’s 2022/2023 season presented by American National Bank continues in the Amaturo Theater at the Broward Center for the Performing Arts Saturday, February 4 through Sunday, February 19, 2023.

Based on the Castle Rock Entertainment motion picture of the same name, the musical has music and lyrics by Tony-winning composer Jason Robert Brown and a book by Andrew Bergman. Together they, as the New York Times reported, “have wrestled the neon mirage of its title into the solid, satisfying shape of a classic Broadway musical.”

Nick Anastasia portrays a mild-mannered Brooklynite Jack Singer who promised his dying mother, played by Dalia Aleman, that he would never get married. However, that was before he met his sweet and beautiful girlfriend, Betsy, portrayed by Gaby Tortoledo. He finally summons the nerve to whisk his girlfriend off to Las Vegas to get hitched only to have a dashing gambler, Tommy Korman, played by Ben Sandomir, threaten to sweep his fiancée away to a life of luxury in Hawaii. Add skydiving Elvises, sexy chorus girls, red-hot romance and really cold feet to this unusual love triangle and this musical hits the entertainment jackpot.

Performances are Thursday and Friday at 7:30 p.m.; Saturday at 1 and 7:30 p.m.; and Sunday at 1 p.m. The matinee performance on Sunday, February 12 at 1 p.m. will be open captioned in which a text display located to the side of the stage scrolls words in synchronization with the performance. Open captioning for Slow Burn Theatre productions is generously sponsored by the Amaturo Family Foundation.

This production is presented through special arrangement with Music Theatre International (MTI) and contains adult language or content.