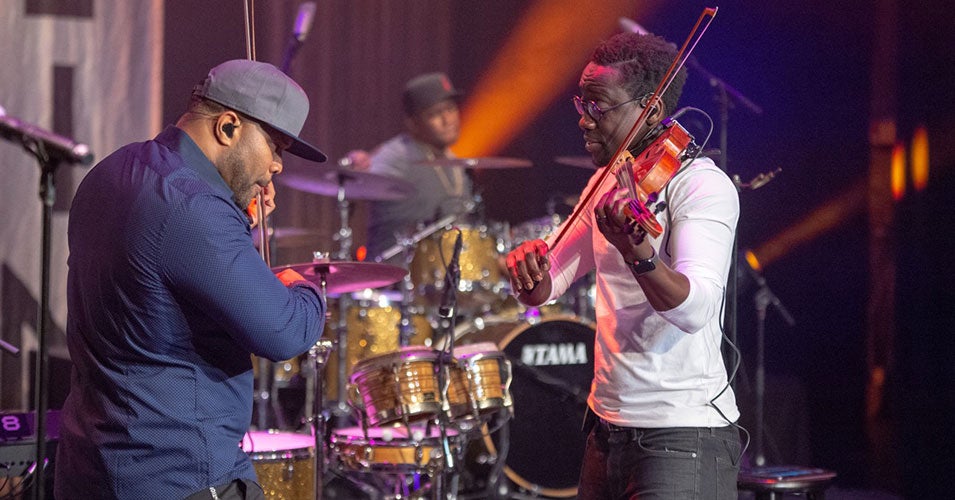 On November 24, 2020, Broward County’s own Black Violin, the classical-meets-hip-hop duo, earned their first GRAMMY nomination for Take The Stairs in the Best Contemporary Instrumental Album category. Released November, 1 2019, Take The Stairs was praised by Loudwire, The Root, and Billboard, who said the album “celebrates Black Violin' genre-less approach to music, from the futuristic anthem ‘One Step’ to the elaborate ‘Serenade.’” In just the last year, the duo has performed at the Oscars Governors’ Ball, on The Today Show, and on Access Daily.

Following the release of Take The Stairs, on November 20, 2020 Black Violin released their debut holiday album Give Thanks, produced by Phil Beaudreau. “Give Thanks employs playful storytelling, whimsical strings, and hard-hitting rhythms to highlight the unifying pillars of the holiday season: Giving back to others and being wholeheartedly thankful,” Black Violin says of the full-length.

For 17 years, Black Violin has been merging string arrangements with modern beats and vocals. Members Kev Marcus and Wil Baptiste first met in orchestra class at Dillard High School in Fort Lauderdale, becoming classically trained on the violin and viola through their high school and college careers. Post-college, they reconvened to produce beats for South Florida rappers, and began building an audience in local clubs. They later went on to win Showtime at the Apollo in 2005, and eventually sold out headline performances at venues across the country, including a sold out two-night headline run at The Kennedy Center in 2018 that featured elementary school music and dance students from the Broward County Public Schools Turnaround Arts
program. Working with Broward Center’s artist-in-residence, the students prepared to take the stage with Black Violin at the Kennedy Center.

Their unique brand of merging the genre they were listening to (hip hop) with the world they were studying (classical) was celebrated with collaborations with Alicia Keys, Wu Tang Clan, 2 Chainz and others. NPR took note and declared “their music will keep classical music alive for the next generation.” UPROXX also featured Black Violin in a mini-documentary as part of their “Uncharted” series, watch the video here.

Pre-pandemic, Black Violin was playing over 200 shows a year (many of these are
performances for young low-income students in urban communities - in the last year alone, the group played for over 100,000 students) with the goal of challenging stereotypes and preconceived notions of what a “classical musician” looks and sounds like. “The stereotypes are always there, embedded so deep in our culture,” says Wil. “Just by nature of our existence we challenge those ideas. It’s a unique thing that brings people together who aren’t usually in the same room, and in the current climate, it’s good to bring people together.”

Black Violin played the Broward Center’s Au-Rene Theater in February, with two sold out shows – one for students from across Broward County Public Schools and one for the public - just before the pandemic shuttered the theater doors. But they returned here to record a virtual performance that is going out to school districts around the country that will keep their mission alive. More to follow when that show hits the virtual stage.

Last year, the group launched the Black Violin Foundation Inc., in an event hosted right here at the Broward Center. This non- profit organization is dedicated to empowering youth by providing access to quality music programs in their community. BVF believes that music and access to music programs should not be determined by race, gender, or socio-economic status. Black Violin Foundation’s inaugural program the Musical Innovation Grant for Continuing Education will provide scholarships to young music students to attend a program of their liking that fosters musical creativity and innovation.