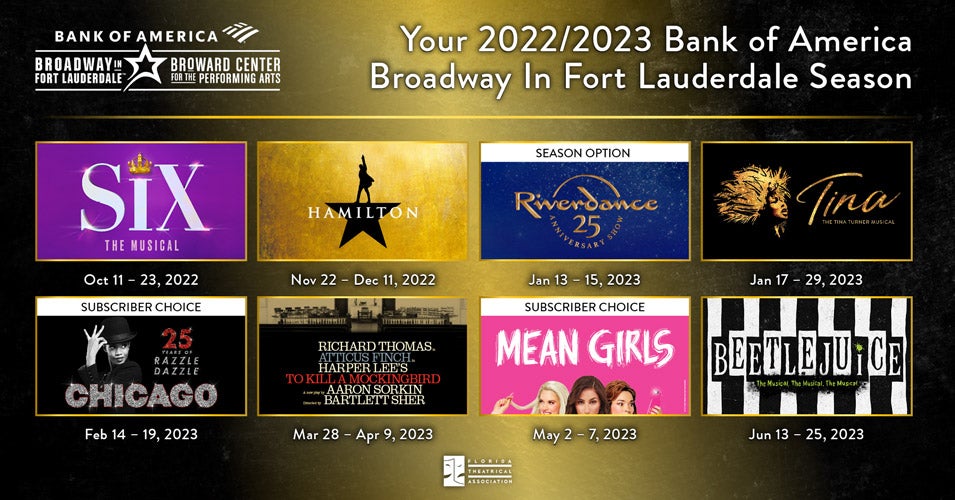 THE RETURN OF
Tony​®​, Grammy​®​, Olivier Award and the Pulitzer Prize Winner

Broadway in Fort Lauderdale is proud to announce its 2022/2023 season at the Broward Center for the Performing Arts. The season includes four South Florida premiers; SIX, TINA – The Tina Turner Musical, Harper Lee’s TO KILL A MOCKINGBIRD and BEETLEJUICE. The season also features the return of HAMILTON and two subscriber choice options, CHICAGO and MEAN GIRLS. RIVERDANCE will also be available for purchase as a season option.

“We are thrilled that Broadway is back in South Florida, and there is no better way to celebrate than to be announcing both Broadway In Fort Lauderdale and Broadway in Miami seasons together today,” said Susie Krajsa, President of Broadway Across America. “We will be kicking off both seasons with the highly-anticipated, global sensation SIX, and we are ecstatic that it will be making its South Florida premiere this fall at the Broward Center and the Adrienne Arsht Center.”

“It’s another fantastic season for Broadway fans at the Broward Center,” said Kelley Shanley, President & CEO of the Broward Center for the Performing Arts, “and we’re delighted to bring such great entertainment to our South Florida audiences. We know everyone is ready to be back at the theater, and with eight exciting shows in the 2022-2023 Broadway in Fort Lauderdale season, we are sure to delight fans with dynamic music, drama, dance and great storytelling. There’s never been a better time to gather for the magic of the theater, and we’re thrilled to introduce four South Florida premieres – and the return of HAMILTON - to devoted audiences who love the experience of Broadway at the Broward Center.”

Season tickets for the 2022/2023 Bank of America Broadway in Fort Lauderdale six-show package are currently available and range from $279 - $945*. To renew or purchase a new subscription please visit BroadwayInFortLauderdale.com.

From Tudor Queens to Pop Princesses, the SIX wives of Henry VIII take the mic to remix five hundred years of historical heartbreak into an exuberant celebration of 21st century girl power! This new original musical is the global sensation that everyone is losing their head over. The New York Times says SIX “TOTALLY RULES!” (Critic's Pick) and The Washington Post hails SIX as “Exactly the kind of energizing, inspirational illumination this town aches for! The Broadway season got supercharged!”

HAMILTON is the story of America then, told by America now. Featuring a score that blends hip-hop, jazz, R&B and Broadway, HAMILTON has taken the story of American founding father Alexander Hamilton and created a revolutionary moment in theatre—a musical that has had a profound impact on culture, politics, and education. With book, music, and lyrics by Lin-Manuel Miranda, direction by Thomas Kail, choreography by Andy Blankenbuehler, and musical supervision and orchestrations by Alex Lacamoire, HAMILTON is based on Ron Chernow’s acclaimed biography. It has won Tony®, Grammy®, and Olivier Awards, the Pulitzer Prize for Drama, and an unprecedented special citation from the Kennedy Center Honors.

Immerse yourself in the extraordinary power and grace of its music and dance–beloved by fans of all ages. Fall in love with the magic of RIVERDANCE all over again.

The critically acclaimed 25th Anniversary North American Tour was shut down in March 2020 during a sold-out return engagement to New York City’s Radio City Music Hall due to the COVID-19 pandemic. In 2021, RIVERDANCE celebrated a return to the stage in the United Kingdom, where the iconic show played to sold out audiences in 27 cities across the country. Then followed its debut at Expo 2020 Dubai with a special production of RIVERDANCE presenting a multi-cultural experience including artists from the Middle East region. A highlight of the four-week run was the RIVERDANCE performance at the USA Pavilion at Expo 2020 Dubai for their Thanksgiving Day celebrations.

HER VOICE IS UNDENIABLE. HER FIRE IS UNSTOPPABLE. HER TRIUMPH IS UNLIKE ANY OTHER. An uplifting comeback story like no other, TINA – The Tina Turner Musical is the inspiring journey of a woman who broke barriers and became the Queen of Rock n’ Roll. One of the world’s best-selling artists of all time, Tina Turner has won 12 Grammy Awards and her live shows have been seen by millions, with more concert tickets sold than any other solo performer in music history.

After 25 years, CHICAGO is still the one musical with everything that makes Broadway shimmy-shake: a universal tale of fame, fortune, and all that jazz, with one show stopping song after another and the most astonishing dancing you’ve ever seen. No wonder CHICAGO has been honored with 6 Tony Awards®, 2 Olivier Awards, a Grammy®, and thousands of standing ovations. As we celebrate our 25th anniversary — you’ve got to come see why the name on everyone’s lips is still…CHICAGO.

Harper Lee’s TO KILL A MOCKINGBIRD

All rise for Academy Award® winner Aaron Sorkin’s adaptation of Harper Lee’s Pulitzer Prize-winning masterwork. The New York Times Critic’s Pick TO KILL A MOCKINGBIRD is “the most successful American play in Broadway history.” (60 Minutes). Rolling Stone gives it 5 stars, calling it “an emotionally shattering landmark production of an American classic,” and New York Magazine calls it “a real phenomenon. Majestic and incandescent, it’s filled with breath and nuance and soul.” With direction by Tony Award® winner Bartlett Sher, TO KILL A MOCKINGBIRD — “the greatest novel of all time” (Chicago Tribune) — has quickly become “one of the greatest plays in history” (NPR). Emmy Award® - winning actor Richard Thomas will play the role of Atticus Finch in the National Tour.

Direct from Broadway, MEAN GIRLS is the hilarious hit musical from an award-winning creative team, including book writer TINA FEY (“30 Rock), composer Jeff Richmond (“Unbreakable Kimmy Schmidt”), lyricist NELL BENJAMIN (Legally Blonde) and director Casey Nicholaw (The Book of Mormon).  Cady Heron may have grown up on an African savanna, but nothing prepared her for the vicious ways of her strange new home: suburban Illinois. Soon, this naïve newbie falls prey to a trio of lionized frenemies led by the charming but ruthless Regina George. But when Cady devises a plan to end Regina’s reign, she learns the hard way that you can’t cross a Queen Bee without getting stung.

He earned his stripes on Broadway… now the ghost-with-the-most is coming to Fort Lauderdale.

It’s showtime! Based on Tim Burton’s dearly beloved film, this hilarious musical tells the story of Lydia Deetz, a strange and unusual teenager whose whole life changes when she meets a recently deceased couple and a demon with a thing for stripes. With an irreverent book, an astonishing set, and a score that’s out of this Netherworld, BEETLEJUICE is “SCREAMINGLY GOOD FUN!” (Variety). And under its uproarious surface (six feet under, to be exact), it’s a remarkably touching show about family, love, and making the most of every Day-O!

Broadway fans can enjoy unique hospitality experiences at the Broward Center once again this coming season including dinner and weekend brunch at the onsite restaurant, Marti's New River Bistro. Marti’s three-course prix fixe dinner menu is perfect for theatergoers who want to savor a relaxed dinner before the curtain rises. There’s an extensive wine list and a selection of contemporary cocktails to complement the menu. Marti’s is ideal for those attending a performance, seeking a waterfront experience along the Intracoastal, or planning an outing with friends and family. With indoor and outdoor seating, this setting for a pre-theater dinner can’t be beat. For information, visit www.BrowardCenter.org/dining.

By purchasing SPIRIT CLUB LEVEL tickets, theatergoers enjoy an all-inclusive experience with complimentary valet parking, fine food, premium open bar (which includes mixed drinks, beer, wine, coffee, tea and soft drinks), access to an exclusive lounge, extra-roomy theater seats and attentive service throughout the evening. The SPIRIT CLUB LEVEL lounge is open one hour prior to curtain and remains open throughout the performance and for 45 minutes after the show. A full season subscription is also available, which will guarantee the same luxurious SPIRIT CLUB LEVEL theater seat for each show in the Au-Rene Theater and the full range of amenities. Request SPIRIT CLUB LEVEL seating when you purchase your tickets for this unique experience.

Another option for Broadway patrons to enhance the theater experience with drinks, appetizers and desserts one hour before the performance and during intermission at the UM Sylvester Comprehensive Cancer Center Intermezzo Lounge. A separate ticket for the lounge allows patrons to enjoy a selection of delicious hot and cold hors d’oeuvres and desserts and complimentary beverages (soft drinks, seasonal craft and premium beer, wine, champagne, coffee and tea) in a spacious lounge offering ample indoor seating and a private outdoor veranda. To purchase tickets for the Intermezzo Lounge for any Broadway performance, visit www.BrowardCenter.org/dining.

The Bank of America Broadway In Fort Lauderdale 2022/2023 season is presented by Florida Theatrical Association. The Broward Center 2022/2023 performance season is supported by the Broward Performing Arts Foundation.

Broadway Across America (BAA) is part of the John Gore Organization family of companies, which includes Broadway.com, The Broadway Channel, BroadwayBox.com and Group Sales Box Office. Led by 15-time Tony-winning theater producer John Gore (Owner & CEO), BAA is the foremost presenter of first-class touring productions in North America, operating in 48 markets with over 400,000 subscribers. Presentations include Disney’s The Lion King, Wicked, The Book of Mormon, The Phantom of the Opera and Hamilton. Current and past productions include Ain’t Too Proud, Beautiful, Cats, Chicago, Dear Evan Hansen, Mean Girls, Moulin Rouge! and To Kill A Mockingbird.

The John Gore Organization is the leading developer, producer, distributor and marketer of Broadway theatre worldwide. Under the leadership of 15-time Tony-winning theater producer and owner John Gore, its family of companies includes Broadway Across America, Broadway.com, The Broadway Channel, BroadwayBox.com, and Group Sales Box Office. The company presents shows in 48 cities across North America as well as on Broadway, Off-Broadway, London’s West End, Japan, and China. It has won Tony Awards in every producing category as well as numerous other Drama League, Drama Desk and Olivier awards.

Florida Theatrical Association – the non-profit presenter of Broadway in Orlando, Fort Lauderdale and Miami – was founded with the charge of educating and developing new theater audiences and encouraging and preserving the presentation of touring Broadway theater. Since 1989 Florida Theatrical Association has presented over 1,050 Broadway performances and distributed over $1.6 million in scholarships and grants to arts organizations across the state of Florida.

At Bank of America, our focus on Environmental, Social and Governance (ESG) factors is critical to fulfilling our purpose of helping make people’s financial lives better. Our commitment to growing our business responsibly is embedded in every aspect of our company. It is demonstrated in the inclusive and supportive workplace we create for our employees, the responsible products and services we offer our customers, and the impact we make around the world in helping local economies thrive. An important part of this work is forming strong partnerships with nonprofits and advocate groups, such as community and environmental organizations, in order to bring together our collective networks and expertise to achieve greater impact. Learn more at www.bankofamerica.com/about, and connect with us on Twitter at @BofA_News