with Alien Ant Farm and Kristopher Roe of The Ataris 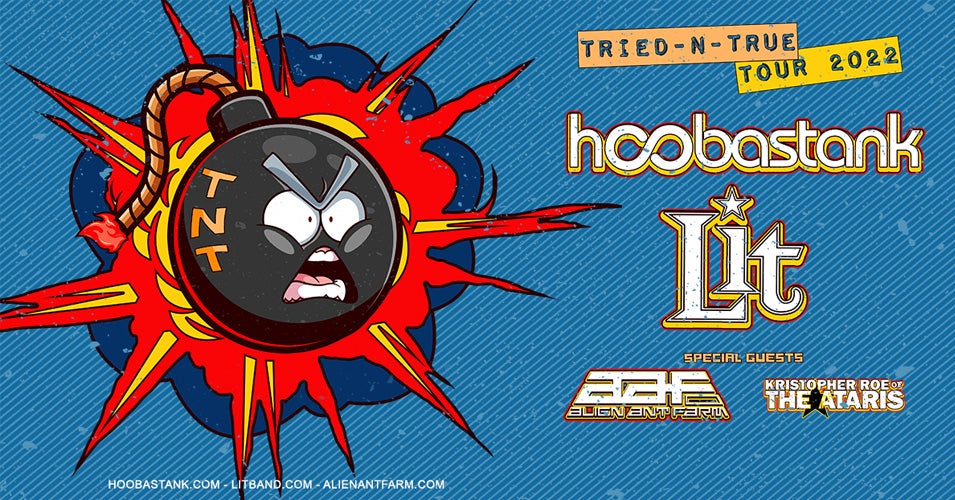 A group of powerhouse bands hit the stage together for one night only!

Best known for their crossover hit “The Reason”, American post-grunge rock band Hoobastank completes this sonic one-two punch with their own impressive catalog of chart-topping hits including “Crawling In The Dark,” and “Out Of Control.”  Lit helped define an entire generation of SoCal power punk with hard-charging hits like “My Own Worst Enemy,” “Miserable," "Zip-Lock,", and "Lipstick & Bruises" and an RIAA Certified Platinum “A Place in the Sun.” Joining them as special guest is Alien Ant Farm, whose debut sing "Smooth Criminal" was a funky metal mix of Michael Jackson's original song. The song hit number one on modern rock charts and more hits including “Bug Bites,” in 2002 Spiderman movie and “These Days”. Founding member, songwriter and lead vocalist Kristopher Roe of The Ataris "Boys of Summer" opens a full night of honest rock 'n roll.

On November 20, 2021, Hoobastank celebrated 20 years of their self-titled release, Hoobastank. The 2001 album launched the career of the band to mainstream success with huge singles including “Crawling In The Dark”, “Running Away” and “Remember Me” - all of which have since been certified RIAA platinum. Almost two decades later, the band is still clocking in at over 6M monthly listeners on Spotify and "Crawling In The Dark" has surpassed the 100M streaming mark across DSPs. The band’s 2003 follow up studio album The Reason took them to even greater heights and solidified Hoobastank as a household name. The title track “The Reason” went 4x platinum and racked up quiet a few #1 chart positions along the way, while the album went 2x platinum. “ The Reason” has over 2 Billion streams/views which has helped lead the way to the bands catalog surpassing the 3 billion mark across the different streaming platforms. The band looks forward to continuing their success in the years to come while also celebrating what they have accomplished so far.

Purchasers will receive an email from StagePilot approximately 3-5 days before the performance date with instructions regarding the fulfillment of the VIP package items and additional details regarding day of show information. All VIP packages are NON-TRANSFERABLE; NO WILL CALL PERMITTED UNDER ANY CIRCUMSTANCES. Non-VIP Package purchasers will not be allowed into any VIP activities or into the venue early. VIP package purchasers may be required to arrive at least 3-4 hours before show time. All pre-show programs and times may vary date-to-date and are subject to modification at any time for any reason. At StagePilot's discretion, VIP package merchandise will either be shipped directly to the address provided at purchase (alternate shipping addresses are not permitted) or available for pick-up the night of the show. If shipped, delivery of such merchandise may occur after the event date. Merchandise is not needed for entry to the show. Personal items may not be permitted into the pre-show performance to be signed by the artist. By purchasing a VIP package, you will not gain or be authorized access into any venue specific VIP or backstage areas. No parental escorts without their own package purchased will be permitted. Health and safety restrictions may change from time of purchase to the show date.  We will confirm any restrictions closer to the event date.