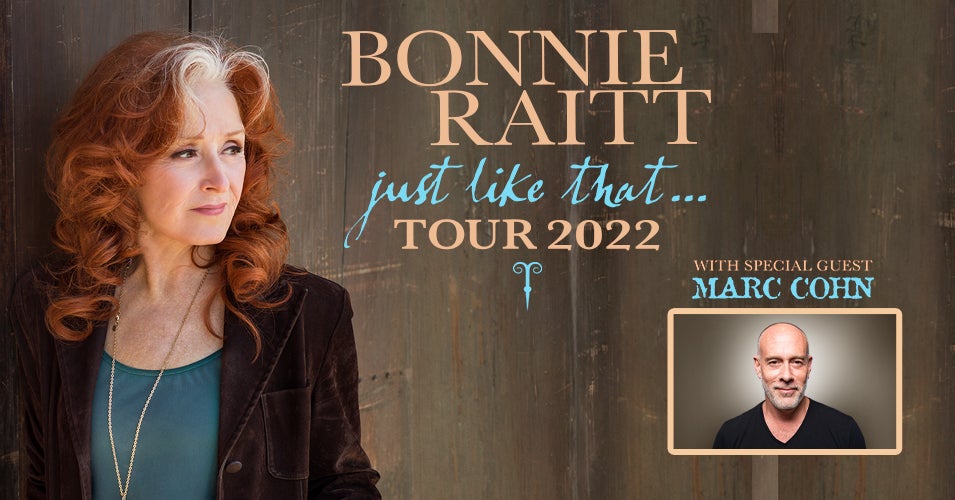 Famous for her heartfelt and bluesy mega-hits including "I Can't Make You Love Me" and "Something To Talk About," and her authenticity, integrity and grit, this 10-time Grammy Award winner and Rock and Roll Hall of Famer will perform the classic songs that defined her legendary career as well as new music from her 20th studio album, Dig In Deep. After nearly five decades of combining blues, country and folk into her daring signature mix, Raitt shows no signs of slowing down. Don't miss your chance to see this global superstar and remarkable blueswoman who Rolling Stone named as one of the 100 Greatest Singers of All Time and one of the 100 Greatest Guitarists of All Time.

Special guest Marc Cohn, singer-songwriter and musician. He won the Grammy Award for Best New Artist in 1992. Cohn is best known for the song “Walking in Memphis” which was a Top 40 hit from his self-titled album. The album featured two other charting singles.  “Silver Thunderbird” and “True Companion”. He has went on to make 5 more albums collaborating with David Crosby, Graham Nash, Bonnie Raitt, and more.  Marc’s 5th studio album, Listening Booth: 1970, a collection of cover songs that peaked at 28 on the Billboard 200 album chart; crossing genres from rock to soul to folk and pop. He co-wrote several tracks with William Bell on his Grammy Award-winning album This is Where I Live. Cohn also collaborated with the Blind Boys of Alabama on their Grammy-nominated song “Let My Mother Love”.

To become a member of the Broward Center and receive access to great seats and pre-sales, visit BrowardCenter.org/Entourage today.

NO PHOTO OR VIDEO

The use of cameras and phones for photos and video recording is strictly prohibited. This policy will be enforced at the discretion of the artist.

We have implemented a number of measures to ensure an enjoyable experience when you visit our campus. Our guidelines have been developed in collaboration with Cleveland Clinic and have been informed by guidance of public health officials including the Centers for Disease Control (CDC). Everyone is welcome and encouraged to wear a face covering at any time at the performance. The artist suggests that ticket holders be up to date on vaccination protection. While not required, we encourage ticket holders to receive a negative COVID-19 test within 72 hours of the concert or stay home if not feeling well and experiencing symptoms. Review our Health & Safety guidelines for full details and check this event page for updates. Event entry policies subject to change.