A Conversation about Race and the Performing Arts 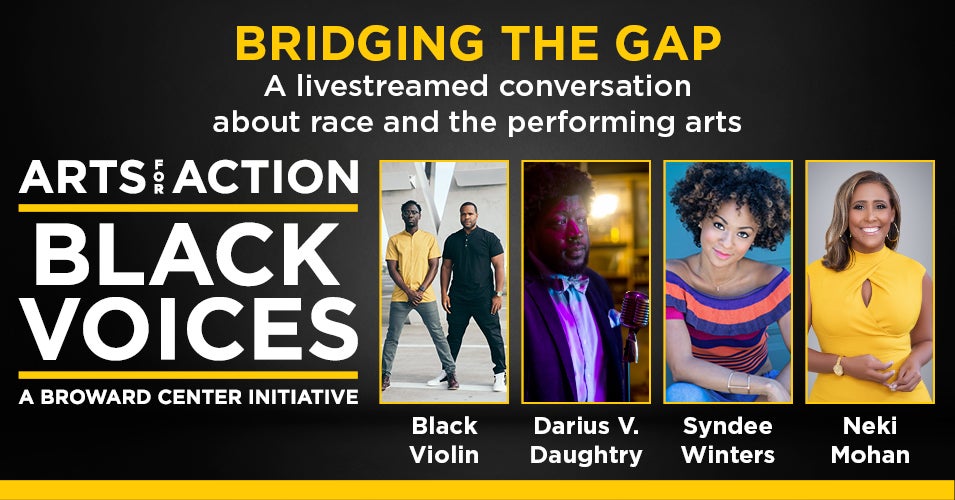 Bridging the Gap: A conversation about race and the performing arts is the inaugural event of Arts For Action: Black Voices, a yearlong initiative of the Broward Center focusing on how the arts and artists can be a force for change in addressing critical issues of social justice and racial inequality. This livestreamed event will feature a roundtable with Grammy nominees Black Violin, Broadway actor and performance coach Syndee Winters, who appeared on Broadway in such shows as Lion King and Hamilton, and Darius V. Daughtry, founder and artistic director of Art Prevails Project, a performing arts organization dedicated to expanding cultural conversation through theatrical performance, arts education, and community engagement. The panel will be moderated by Neki Mohan, an adjunct professor at Barry University who served as a broadcast journalist at WPLG for 16 years.

Registration is required. Click here. Questions can be submitted in advance to eventsupport@BrowardCenter.org or during the livestreamed event.

The Broward Center’s Arts for Action: Black Voices initiative is funded through the Community Foundation of Broward's Art of Community grant program, which aims to use the arts as a tool or catalyst to heighten awareness, deepen knowledge, and mobilize action on social justice issues.

Support has been provided by the following Funds at the Community Foundation of Broward: Mary N. Porter Community Impact Fund, Community Concerts Association of Fort Lauderdale Performing Arts Fund, A Fund for the Performing Arts and the Linda and Michael Carter Fund.