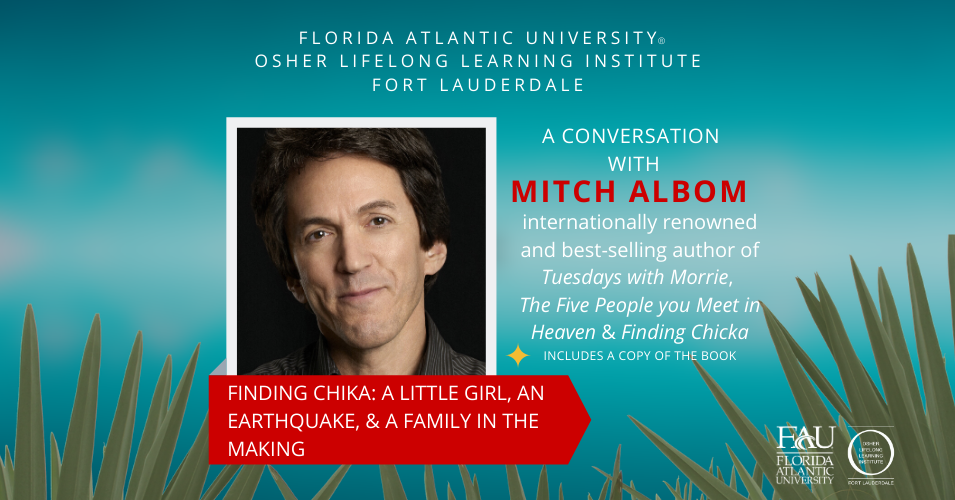 Internationally renowned best-selling author, columnist, radio host, and philanthropist Mitch Albom is an inspiration around the world. His books, including the New York Times Bestselling Tuesdays with Morrie and The Five People You Meet In Heaven, have sold over 39 million copies and have been translated into over 45 languages. Join fellow international bestselling author and founder of the Palm Beach Book Festival, Lois Cahall in an intimate conversation with Mitch about a series of life changing events that lead to the writing of his newest and most personal release Finding Chicka: A little girl, an earthquake, and the making of a family. Finding Chicka, marks his return to nonfiction for the first time in more than a decade as a memoir that celebrates Chika, a courageous young Haitian orphan whose life would forever change his heart. Book signing to follow. A copy of the book is included in the ticket price. This event is co-presented in association with the Palm Beach Book Festival at FAU.

Mitch Albom is the author of numerous books of fiction and nonfiction. He has written six consecutive number one New York Times bestsellers, including Tuesdays with Morrie, the bestselling memoir of all time. He has also penned award-winning TV films, stage plays, screenplays, a nationally syndicated newspaper column, and a musical. Albom’s books have collectively sold more than thirty-nine million copies in forty-two languages. He founded and oversees S.A.Y. Detroit, a consortium of nine different charitable operations in his hometown, and created a nonprofit dessert shop and food product line to fund programs for Detroit’s neediest citizens. He also operates an orphanage in Port-au-Prince, Haiti. He lives with his wife, Janine, in Michigan.