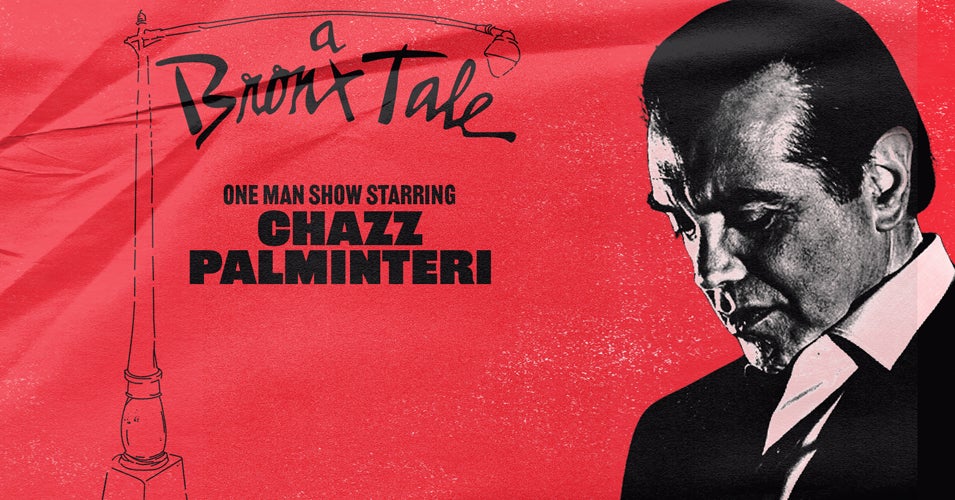 This is the show that started it all! Before it became a hit Broadway musical or a feature film co-starring Robert DeNiro, Chazz Palmintieri wrote and performed a one-man play of A BRONX TALE — bringing 18 characters to vivid life in the gripping tale of a rough childhood on the Bronx streets.

A BRONX TALE was first mounted Off-Broadway in 1989 and helped establish Palminteri as a writer and actor with a distinct voice. With more than 50 film credits, including The Usual Suspects, Bullets Over Broadway (AcademyAward nomination), Analyze This and more, you will not want to miss this tour-du-force performance by Chazz Palminteri in his original one-man show with direction by four time TonyAward winner Jerry Zaks.

A note from Chazz: A BRONX TALE is a fictionalized story based on a true incident. When I was a young boy growing up in the Bronx, I witnessed a man shoot another man right in front of me while I was sitting my stoop. At that time, I thought they were fighting over a parking space in front of my building. I never did find out what they were fighting over, but it doesn't matter now anyway. The incident is how A BRONX TALE began.