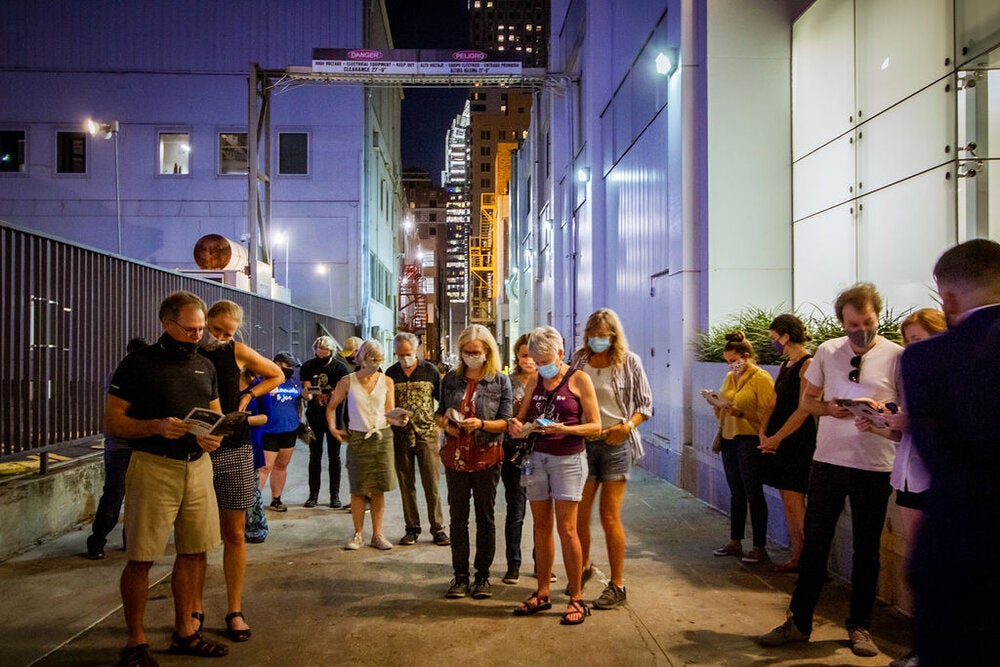 FORT LAUDERDALE, Florida (December 4, 2020) – The Broward Center for the Performing Arts and Right Angle Productions have the perfect solution for those feeling 2020 has robbed them of the joys of life with the fun interactive outdoor experience Art Heist from Tuesday, December 22 – Sunday, January 10. Tickets go on sale Friday, December 4.

The game is afoot each show as amateur gumshoes in socially distanced groups interact with a wild group of wily career criminals while moving through five walkable and wheelchair accessible locations in downtown Fort Lauderdale to gather clues from slimy con men, rumpled art recovery specialists, a possible inside man, a gentle psychopath, and the larger-than-life but definitely real self-proclaimed "Greatest Art Thief of All Time."

Local actors portray the roles to reveal clues to the detective audience through conversations and scenes that lead them on their way and sometimes astray with red herrings. Actors improvise with every interaction ensuring no two performances will ever be the same. Every good crime story has someone getting framed and Art Heist is no different, as the experience ends with the sleuths having the opportunity to become living art inside a giant picture frame that they can share on social media and by using #artheistexperience.

The theatrical caper is based on the biggest art heist in history that took place on March 18, 1990, when two thieves disguised as police officers entered Boston’s Isabella Stewart Gardner Museum in the middle of the night, telling guards they were investigating a disturbance. It was the last anyone saw of the robbers or the 13 works of art valued at a half a billion dollars that included paintings by Rembrandt, Vermeer and Manet.

The masterminds behind bringing back live theater, employing local actors and presenting it outdoors are creator/producer Justin Sudds and writer/director TJ Dawe and Ming Hudson. Dawe co-created The One Man Star Wars Trilogy, One Woman Sex and the City, and PostSecret: the Show, which have toured internationally. Hudson is a physical theater practitioner, freelance performer, devised theater creator and teacher and instructor at the Canadian College of Performing Arts.

Each detective squad is limited to 35 and begins its journey at the Broward Center AutoNation Box Office. Art Heist is offered in the afternoon and evenings, Tuesday – Sunday. Tickets are $39.50. Family-friendly, Art Heist contains some mature themes, making it recommended for ages 12 and up. Tickets are available online at BrowardCenter.org and Ticketmaster.com, the only official ticketing service of the Broward Center.

Ticket buyers are encouraged to arrive at the Broward Center AutoNation Box Office 15 minutes before their scheduled time as the tour start time may vary in order to manage tour group size due to physical distancing guidelines. Face coverings are required and health and safety guidelines will be followed and are available at BrowardCenter.org under the visit tab. The tour is wheelchair accessible. Rain or shine.

While at the theater, ticketholders also have the opportunity to take a 45-minute guided Backstage at Broward Center Tour with knowledgeable guides who share historical and fun facts as they move from dressing rooms to the sound booth to center stage in fully wheelchair accessible tours that include an onstage photo op in the beautiful Au-Rene Theater and dressing rooms as well as an insider’s look at scenic elements and puppetry courtesy of Puppet Network. Backstage Tour tickets are $10.

The Broward Center is on the Road to Recovery. While the theaters are dark and staff is at a minimum, the hard work continues. Faced with the loss of 90% of its revenues, the Center depends on contributions to sustain its operations as it prepares for the day when the doors reopen, the curtain rises and the lights return to the Broward Center stages. Donations to the Road to Recovery Fund can be made at BrowardCenter.org/R2R.