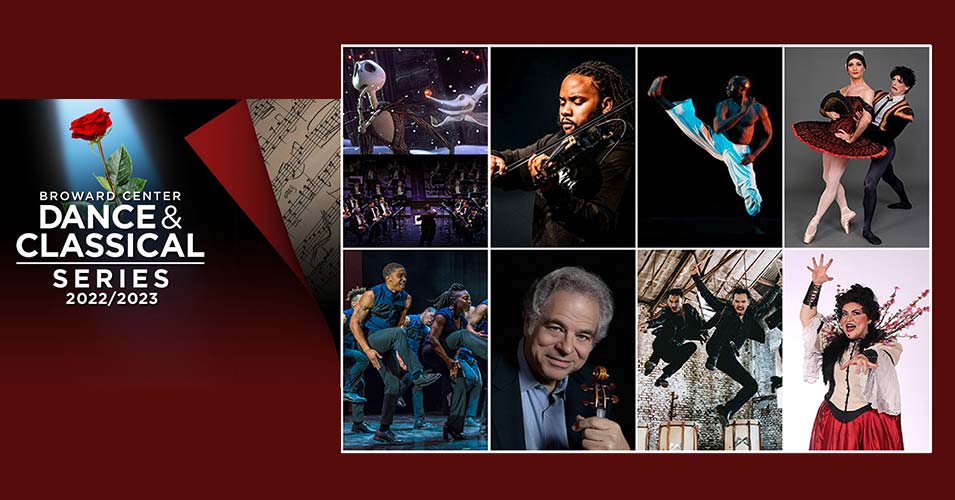 Disney in Concert Tim Burton’s Nightmare Before Christmas will screen the haunting holiday classic with Danny Elfman’s score performed live by the South Florida Symphony Orchestra in the Au-Rene Theater at the Broward Center for the Performing Arts on Friday, October 28 at 8 p.m. From the mind of Tim Burton comes the story of Jack Skellington, Halloweentown's pumpkin king, who plots to bring Christmas under his control by kidnapping Santa Claus and taking over the role after he accidentally stumbles on Christmastown. But Jack soon discovers even the best-laid plans of mice and skeleton men can go seriously awry. The Broward Center in partnership with South Florida Symphony Orchestra presents this event that is licensed by Disney Concerts©. All rights reserved. Tickets are $45-$75 with $160 Spirit Club Level tickets and $85 VIP tickets offering premium seating.

The Series moves to The Parker with Sons of Mystro Sunday, November 6 at 6 p.m. Born in South Florida to a Jamaican father and Barbadian mother, Malcolm, 23, and his 20-year-old brother Umoja learned to play violin through South Florida's public school system and attended Dillard High School for the Performing Arts. Together, these brothers are Sons of Mystro using their violins to interpret reggae classics, American pop songs and their own creations accompanied by a DJ & a drummer. International Reggae and World Music Awards honored them as with the “Emerging Artist Under 21yrs Old” award. Their debut recording, Reggae Strings is available now wherever music is streamed or sold. Mentored by Black Violin, these artists' stars are on the rise. This is an Arts for Action: Black Voices initiative, which is generously supported by JM Family Enterprises, Inc. Tickets are $25-$30.

Award-winning choreographer Ronald K. Brown and his Evidence company come to the Amaturo Theater at the Broward Center for the Performing Arts on Thursday, November 17 and Friday, November 18 at 8 p.m. This electrifying program includes three works that exemplify Brown's contemporary African style including his newest work, Mercy: Come Ye, a celebration of artist activist Nina Simone, and a newly conceived, 20th-anniversary presentation of Brown's soulful masterpiece Grace, originally created for THE Alvin Ailey American Dance Theater. The Los Angeles Times praised the troupe for a "sophisticated amalgam of Afrocentric movement and modern dance" that often makes "spirituality …something vibrant and transformative." This presentation is made possible, in part, by support from Funding Arts Broward and the National Endowment for the Arts.

Toeing the line between high art and high camp, Les Ballets Trockadero de Monte Carlo brings its 16 all-male beloved burly dancers to Lillian S. Wells Hall at The Parker on Saturday, February 4 at 8 p.m. Celebrating almost 50 years, they have been delighting audiences of all ages at sell-out performances featuring their fabulous sense of fun through flawless dance as they perform parodies of famed ballet classics. The "Trocks," as they are affectionately known, boast a wicked comedic sense of humor which is only outmatched by their panache and technical prowess. Every performance frivolously froths with tutus and testosterone, blush-pink ballet pumps, fierce false eyelashes and prima ballerina attitude. Tickets are $39.50-59.50.

Step Afrika!, the first professional company dedicated to the tradition of stepping, comes to The Parker on Sunday, February 5 at 6 p.m. Under founder C. Brian Williams, stepping has evolved into one of America's cultural exports. Step Afrika! now ranks as one of the top 10 African American dance companies in the United States and has toured in more than 50 countries. Blending percussive dance styles practiced by historically African American fraternities and sororities, Step Afrika features traditional West and Southern African dances, contemporary dance and an array of art forms into a cohesive, compelling artistic experience. Each performance is unique as performances integrate songs, storytelling, humor and audience participation. This production is made possible in part by Funding Arts Broward, supporting innovative local visual performing arts in Broward County. Tickets are $25-$40.

Violin virtuoso Itzhak Perlman with pianist Rohan De Silva comes to the Au-Rene Theater at the Broward Center for the Performing Arts on Thursday March 9 at 8 p.m. Beloved for his charm and humanity as well as his talent, Perlman is treasured by audiences throughout the world who respond not only to his remarkable artistry, but also to the irrepressible joy of making music, which he communicates. Perlman enjoys superstar status rarely afforded a classical musician and was awarded a Kennedy Center Honor celebrating his distinguished achievements and contributions to the cultural and educational life of our nation. Tickets are $55-$125 with $145 Spirit Club Level seats.

Named an official "Cultural Ambassador to the National Identity of Argentina,” Malevo performs at The Parker on Thursday, March 9 at 8 p.m. This thrilling all-male group specializes in Malambo, a traditional Argentine folk dance, and merges it with urban percussion and other dance styles like flamenco. With live music and virtuosic dancing, Malevo delivers an exhilarating and engaging show that is perfect for the entire family. The group has performed in Las Vegas, New York, Dubai, Paris, Cairo, St. Petersburg and Montreal. Malevo also appeared with Latin pop star Ricky Martin and Cirque du Soleil, held a year-long residency at Universal Studios Japan and made it to the semifinals on the hit TV show America's Got Talent. Tickets are $37.50-$57.50.

The 2022/2023 Broward Center Dance and Classical Series culminates with the New York Gilbert & Sullivan Players performing the new and critically acclaimed production of The Mikado in the Au-Rene Theater at the Broward Center for the Performing Arts on Sunday, March 12 at 4 p.m. Gilbert's lyrics and Sullivan's melodies, which have delighted comic opera lovers for more than 135 years, are still as fresh as "the flowers that bloom in the spring.” The Mikado features such beloved characters as Yum-Yum, Nanki-Poo, Ko-Ko, the Lord High Executioner with his "little list" of potential victims, as well as the fearsome Katisha, the hilariously ridiculous Pooh-Bah and the politely sadistic Mikado himself. A brief new prologue set in the offices of the D'Oyly Carte Opera Company frames the classic work for today's audiences and underscores how The Mikado can be enjoyed by artists and audiences of all backgrounds. This production is made possible in part by Funding Arts Broward, supporting innovative local visual performing arts in Broward County. Tickets are $20-$99.50 with $124 Spirit Club Level seats.

Broward Performing Arts Foundation. AutoNation, Greater Fort Lauderdale Convention & Visitors Bureau, Spirit and Sylvester Comprehensive Cancer Center are proud sponsors of the Broward Center. Programs are also sponsored in part by the State of Florida, Department of State, Division of Arts and Culture, the Florida Council on Arts and Culture, and the National Endowment of the Arts.