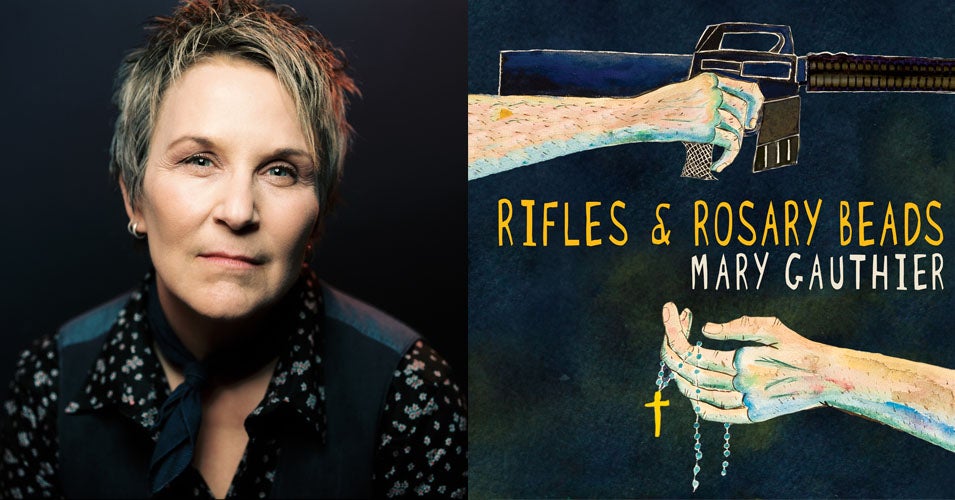 Mary Gauthier’s Rifles & Rosary Beads is a collection of songs she co-wrote with US Veterans over the last five years through Songwriting With;Soldiers, a non-profit that offers Veterans a chance to work with professional songwriters. The songs on Rifles and Rosary Beads tell the story of the affect war has had on the Americans who’ve served, and their families. “You'll be hard pressed to hear a more powerful moving work this year - or any other.” Randy Lewis, LA Times. The Americana Music Association has nominated Rifles and Rosary Beads for Record of the Year, and Entertainment Weekly named it one of the 10 best records of the year, so far.

Mary Gauthier is a regular on Grand Ole Opry, and has had songs recorded by Tim McGraw, Blake Shelton, Jimmy Buffett, Bobby Bare Sr., Bettye Lavette, Amy Helm, Mike Farris and many others. Eight albums into her career, she was named, “One of Americana’s most admired artists across the US and around the world,” by The Wall Street Journal, noting her “razor-sharp eye for detail and her commitment to unsentimental self-reflection.”

Special guest Jaimee Harris is poised to become the next queen of Americana-Folk, a slightly edgier Emmylou Harris for the younger generation. Her soon-to-be released debut album draws comparisons to Patty Griffin, Lucinda Williams, and Kathleen Edwards – all writers who know how to craft a heartbreakingly beautiful song with just enough grit to keep you enthralled. Harris writes about the basic human experience in a way that is simple, poetic, and often painfully relatable. Harris’s talent has impressed artists and critics alike. Jimmy LaFave deemed her his “new favorite” and Peter Blackstock of the Austin-American Statesman called her “one of Austin’s most promising young singer-songwriters.”.