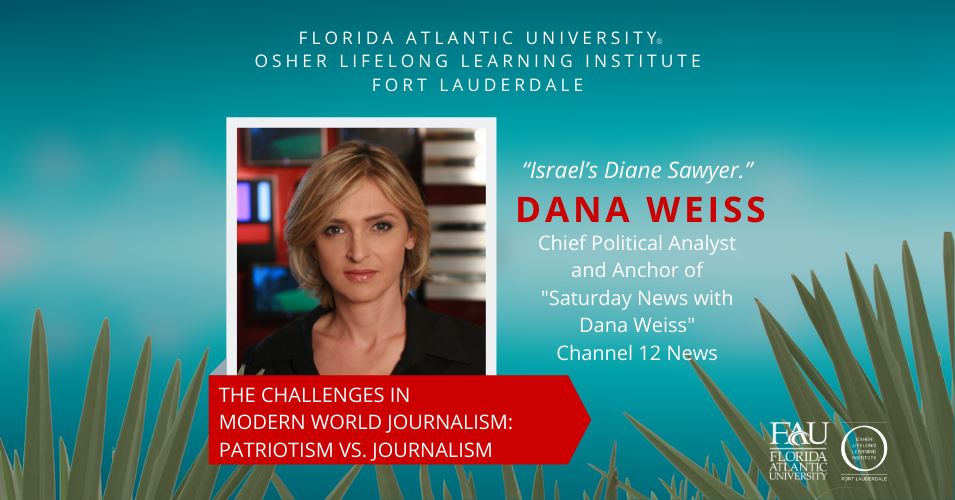 In today’s society, do journalists have the power to be both objective and patriotic? In a world where crises are endured daily and unprecedented national elections are setting the standard, what is the appropriate role of the media? What does it mean to report in an era where fake news combats the truth? Addressing the challenges of modern journalism, Dana Weiss discusses the conflicting roles of patriotic identity and journalistic integrity, the impact of reporting during war-time and election seasons, and how the TV studio can act as a front line when reporting on global terror.

Dana Weiss is one of Israel’s most trusted and decorated journalists. As a reporter for Israel’s Channel 2, the largest television station in Israel, millions of Israelis have welcomed Ms. Weiss into their homes, earning her the nickname of “Israel’s Diane Sawyer.” She has reported from the frontlines of every major war and political event in the last two decades. A prolific political commentator, she worked first as a legal affairs correspondent and then as host of “Meet the Press” for almost a decade. Today, Ms. Weiss anchors the prime time Saturday evening news, the most watched news program in Israel, and serves as the channel’s chief political analyst. She is a highly sought after speaker, covering a variety of topics, including intersection of global terrorism and the modern media, and the role of women in modern Israeli society.